¿Why fear leads to unmaintainable code? As a manager, refactoring has some risk. You modify something that’s working, but you can break it.

Tipical timeline for a failed proyect: duplicated code, huge merge requests, no pair programming, isolated knowledge, people don’t understand code from others and nobody wants to do it,…

At some point, it’s more attractive to rewrite everything from scratch, what makes even more difficult the idea of improve the current existing code

Legacy code is not bad at all, it’s a repository of decissions taken during a long time. It’s the living history of the project. This is the main reason why to say no to a total rewrite.

We could see eXtreme Programming practices as the solution for these problems. 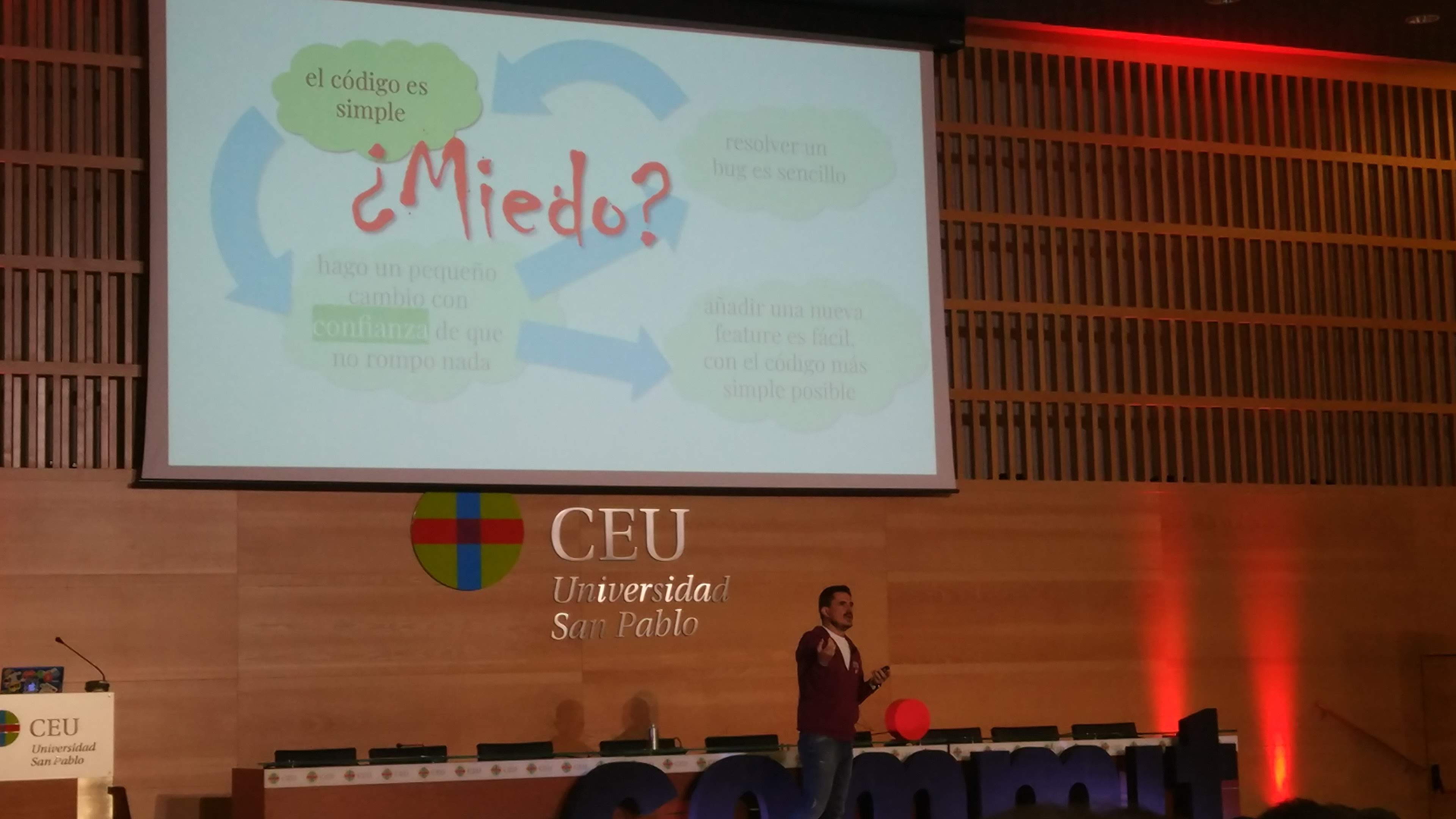 ¿What reasons can we provide to refactor? Provide just economic reasons, nothing about technical reasons. This way, Business will understand us better:

Collective ownership: the code belongs to everybody in the team, there are shared style guids, respect is encouraged among team members,…

DevOps with Docker, Kubernetes and other tools

People started talking about DevOps in 2009, in a conference, where two Flickr workers, a developer and a sysadmin, showed how they were deploying up to 10 times a day.

DevOps is about collaboration, in an endless loop.

Kubernetes does the same as the best sysadmin

She talks about some tools:

NoOps: concept the promotes collaboration between Business and Development, forget about Dev-Ops, because it assumes infrastructure is already embedded into Development (cloud,…). (I think this is promoted by someone from a cloud vendor)

How to improve as a developer

Do you need a university degree to be a developer? Well, not so much. You’ll study related concepts, but you learn too much about other subjects that can’t be applied to development. Wow, the talk starts being quite controversial.

Specialist or generalist? None of them, t-shaped

Should you follow the trends? It’s ok to know about them, but it’s not worth it to spend a lot of time working with all of them. It’s beter to spend that time studying the basics, read the classics.

Individual or team goals? Both are right, but team goals are better for the long run

You should love code reviews

Choose your battles, do not impose your opinions, do not get angry and sometimes it’s better to stop discussing to move forward.

Share your ideas, all of them have value to the team

Don’t be afraid to ask for help, but you can spend some little time on your own doing the easy work before asking.

Don’t let your job to limit you. Find those little tasks that motivate you, that makes you feel good.

Automate everything you need to do twice or more.

Be minimalist with your code. The least elements your code has, the better. Avoid unnecessary complexity.

Share your thoughts about big tasks with the rest of the team before starting working on them. It’s hard to realize you spent some time on a task and then that hard work has been done for nothing.

Do we need arquitecture in the front-end? Yes, we do

Front-end technologies… are stronger or weaker than back-end ones?

TypeScript makes it more difficult than JavaScript to do the tasks wrong.

Microfrontends, a new trend, according the speaker, we’re not ready yet to use them in production. I think there are people interested in them and they have a different opinion (see ThoughtWorks Tech Radar).

In many projects, in general, front-end is just a small box next to the big back-end design graph.

Usually, not too much time is spent designing the front-end:

We end up creating dependencies among components, sharing state among them, coupling with API responses,… 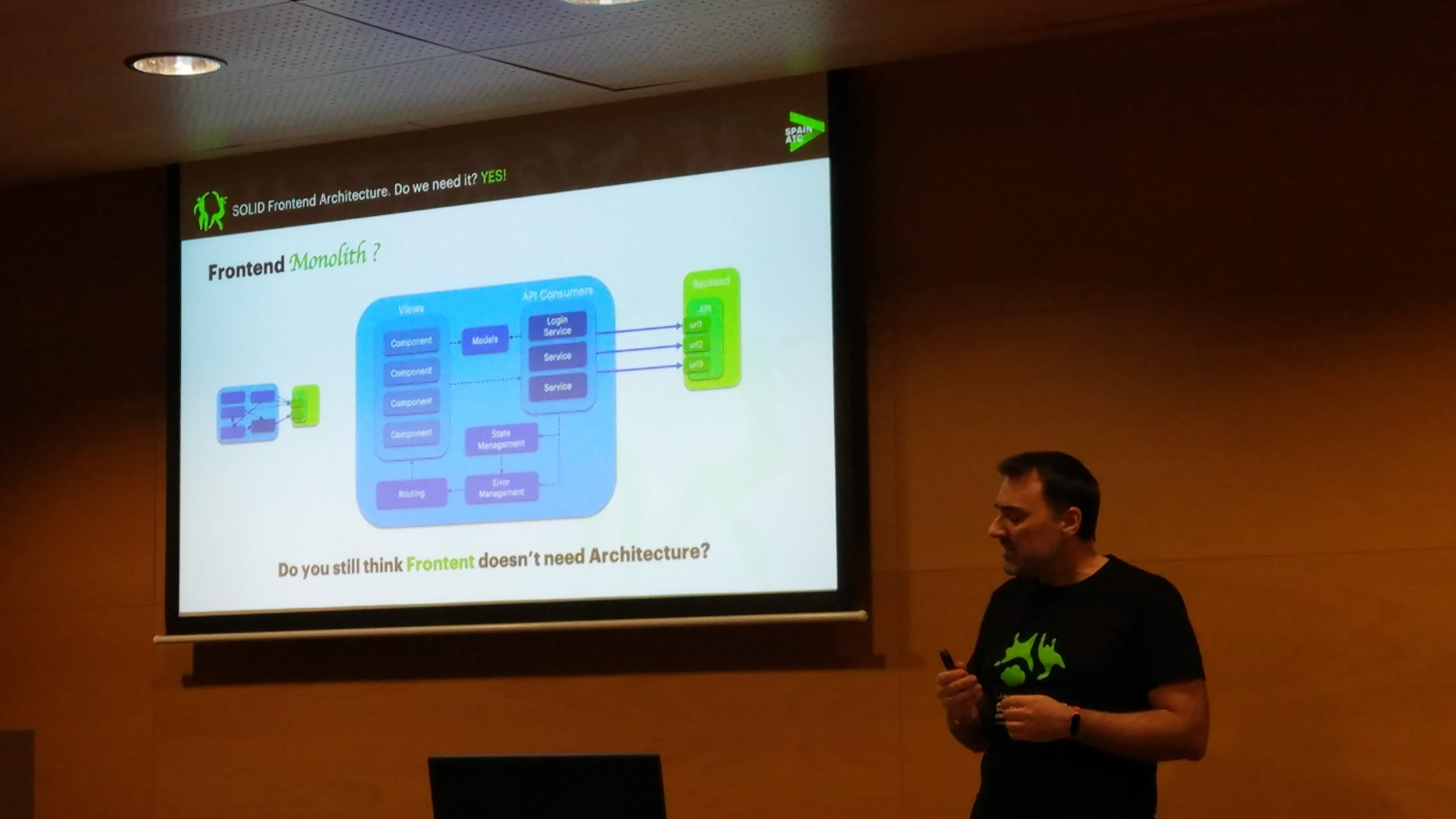 The speaker was quite excited about front-end and TypeScript.

Second part of a choose your own adventure talk series, about DDD.

How should we communicate two modules (in DDD terminology)? Let’s say notifications module needs to send an email to all users (users module) about new courses (video courses module) from the last month

They start by writing an acceptance test, outside in:

In the Controller, as we still are in the infrastructure layer, I can be coupled to the database (Repo implementation), to Spring, to the framework of choice,…

The Controller sends a DTO (with primitive types, that are easy to serialize) to the Application Service. But it’s not invoked directly. The Controllers sends a Command to the Command Bus, where it’ll be received by a Command Handler, where our use case will start. the Command Handler in CQRS is similar to the Application Service in hexagonal arquitecture.

Inject Repo? Not a good idea. In this case, a Module (or Bounded Context) will know about the Model or another Module/BC

Inject the Application Service? Not as bad as before. They’ll share DTOs, that are still details from another Module/BC

Ok, now, we need to replace our MySQL database. Elasticsearch is chosen. Easy, right? Let’s just replace Repository implementations and that’s all, right? Not so easy, but it’s not so bad.

Now, it’s just a matter of migrating the data. Here I lost completely: recorded events, tags used for videos stored as JSON in the database to make searching easier,…

How do we make decisions? How do people think? Knowing some of the existing biases we can understand better to the people of our teams and the decisions they make.

We think the world is like we perceive it, but there are as many different perceptions as people in the world.

Biases and stereotypes: they don’t have to be a bad thing, they help us to make decisions without too much effort, daily, in an efficient way, saving cognitive load.

Reciprocity: we tend to do favors back to those people do favors to us

Commons sense doesn’t exist in a global sense, it depends on the culture

We think we make rational decisions, but external factors influence us a lot: being hungry, tired, cold/hot temperature,… For instance, judges sent 100% people to prison when they were judged just before lunch time.

When we make a review, or give our opinion to somebody about her work, it can modify your opinion if you ask other people their opinion. It’s like anchoring in a negotiation. Beware of this, other opinions can influence you.

Utility bias: a senior’s opinion is more relevant than a junior’s one

Status quo bias: we always do it this way here

People tend to always justify themselves, no matter how ridiculous the matter is (story about the hypnotized man that woke up with an umbrella in a sunny day).

[Cognitive dissonance:] it’s hard to give up on something we dislike if we needed much effort to accomplish.

Attribution error: we attribute other people errors to their personality, to the person itself (she’s bad, he’s lazy), while we attribute our own errors to external factors (bad luck, wrong tool,…). A possible solution is to assume everybody does good, that they try to make their best the can/know

Companies should encourage people helping other people, it’s good when people focus on others

We usually do favors to those people we did favors in the past.

When we don’t like someone, we make up reasons to make her look like a bad person

Modify the environment and you’ll modify how people behave

We make decisions depending on how the information is presented to us. What do you prefer?

Communication among peers is only possible when there is no punishment. That’s why you don’t complaint to your boss, because you’re afraid he fires you.

Learned incompetence: people/students fulfil expectations (good or bad ones) given by their boss/teacher. Story about teachers and anagrams.

Experiment carried by us about folding a sheet of paper:

We always interpret the message, no matter how simple or concrete they are. Beware of assuming people understand exactly what you want to tell them

TDD in the real world

TDD is a tool to design features, not to design arquitecture

That’s how most tutorials work out there, but the real world doesn’t work like that and it’s difficult to apply. Why? Because you have two unknowns, input and output parameters, what makes you to assume more than you should:

This way there is less unknowns, because you’re starting the flow:

When you start testing the next unit, the inner one, you can forget about the first one, its behaviour has been fully tested (in inside out testing it’s mocked)

It also helps you avoid too defensive programming, because input data has been verified and sanitized in outer units.

Ok, we have all tests, everything is tested, 100% code is covered. Can something fail yet? Of course, it will. But it won’t be your code, it’ll be the config, a wrong injected dependency,…

The speaker highly recommends the outside in approach.

It might be interesting to enroll on the Advent of Code 2019.